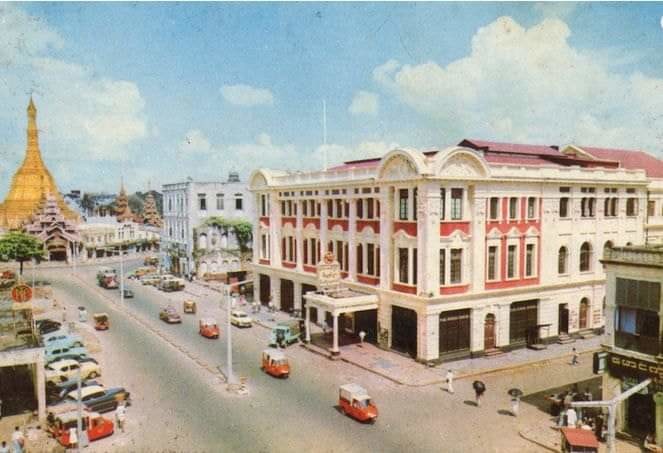 "YOU CAN RELY ON De SOUZA FOR THE REAL MEDICINE"

"This postcard from 1961 is of the once-prosperous De Souza Pharmacy building. This building is still standing in Mahabandoola Road (old address was 475 Dalhousie Street), just west of Sule Pagoda. It is now occupied by the Accounts Division of Myanmar Posts and Telecommunications. The postcard was printed before 1964, as the Maung Ko & Bros Watch showroom was still there then. On the opposite side would be the A Swe Daw watch showroom. The signs on the De Souza building read, “You can rely on De Souza for the genuine medicine.”

Rangoon was once home to a community of Goans (from then-Portuguese Goa). De Souza Pharmacy was one of the biggest Goan businesses in the city. Unfortunately, the portico on the building was demolished. There was a dental clinic run by Mr de Souza in the building where my parents use to take me for my dental check-ups or treatment up till 1963, after which Mr de Souza had to close his clinic and leave the country. Back then, Dr/Mr de Souza’s dental clinic was the best in Yangon.